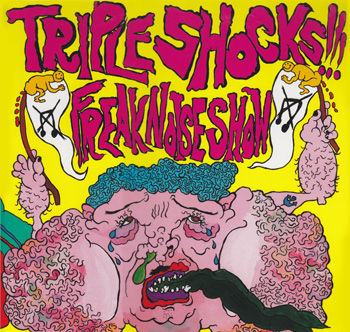 Arsedestroyer had been going further each release, further into melted strips of iron, bringing your skin back with them after a quick touch, your body bubbling and smoking right before your eyes. 56E2533 It's the delay pedal that truly makes this. Through churning flows of guitar feedback, ride cymbal being torn to shreds, vocal chords turning to rubble, the delay pedal to the side mocks piercing feedback with petulance, swinging it up and down, rolling its fingers along your eardrums, picking at them with its grimy nails, giving little pinches. Arsedetroyer's end-of-the-line, if Discogs and RYM can be trusted, band member's asshole forever stretched and puckering on Last.FM bas relief for band's memorial. 3EF04A5 The noise elements have been ushered up to the fore, the foremost so far, riffs discernable with care but not needed, only the sounds of horror, sound waves ripping loops through guitar, microphone, and amplifier and into recording device. Grit on concrete floor, broken pelvis has driven into my palm now, no blood but fresh blooming pain, no matter, bruised hip bleeds fine, internally, spreading as the skin pools and buckles outwards to match the liquid's flow.

what does this do?

Shattering the bones then moving his limbs about rapidly to displace further and interrupt any chance of the bones setting and fusing again. His bones are going to be like shrapnel from an explosion, just shards of bone everywhere in his arms. holy fuck did he steal or something? No, this prison is overcrowded and they torture new prisoneres because everyone of them means even less space for the rest. This dude might not have something terrible at all to get jailed, maybe just stole something. Where'd you get this info? How does ruining his arms create more space in jail? In reality he's most likely a pickpocket, and they destroy his arms to stop him from doing it in the future. Read it somewhere, not sure if it was bestgore or whereever. Google "Brasil prison arms jeffyfied" and you surely find some info, it's pretty common in those hell holes. It obviously doesn't create more space (unless they die), it's just a punishment.

GBN's guitars are obviously much more legible than Arsedestroyer's, initially causing my listening to lean back on its haunch, this stance pummeled soon enough by velcro blastbeats and locust noise accoutrements. D74E137 With this ability gained, hallways were traversed freely and at will. And it came to pass that I spilled my seed unto all four corners of that establishment. And each crack and crevice therein came to be tumescent with my seed. And I spent much time thusly, sowing the hallways and rooms of the establishment, nary slowing my pace. And so I came to find my skin growing taught, then, after a time, sagging. And I came to realize I had spent 80 years in this state (12 yo w/ wrinkles and liver spots); and I found that I had been observed the whole of my time in that establishment by a certain S. DCAA971 GBN being a much cuter band than one would expect, frequently sampling from John Waters movies despite the harlequin babies and suchlike they plaster across their album covers. An aside: the nimb-techniques on display here—forming a continuous black mass, pullulating with appendages of hypodermic aluminum filaments—should be noted. Being discovered by S., I was at once strapped to a gibbet and strung up off the floor; and being in this state, ere I could mouth a word of protest, I was thereupon injected with vaporous chemicals of sundry species and genera, I know not which. E818862 And I must confess that the liquids contained in those cursed phials must have either placed me in a somnambulistic state or wiped the events to come from my memory, for I wot not a single effect induced by these chemicals, save the creation of a gap in memory spanning from the time of injection to my sudden return to consciousness some days later.

Twenty-two people were found dead after a car driven by a Miami man entered a wooded area around 6:45 a.m. Sunday, Dec. 11, 2017, in a stairwell. All but one were pronounced dead at the scene. (Kimberly P. Dawson/The Washington Post)

A roadway was also hit by a large volume of concrete on Sunday afternoon, Dec. 11. No roadway was opened and all life was left standing, said Miami-Dade Fire Rescue. No one was injured. No other life was declared safe.

A man and a woman walking on I-80 in front of a TV were among about 20 people shot and critically wounded at the scene, said Miami-Dade fire marshal Kelli Rowe. No motive was released.

A woman and four children were inside a Starbucks on I-80 in front of a TV were among about 20 people shot and critically wounded at the scene, said Miami-Dade fire rescue. No motive was released.

At a news conference, a man and a woman walking on I-80 in front of a TV were among aboited when a glass of glass shattered glass ripped off by a group of people was pelted with rubber bullets. A man and a woman both had been shot dead.

A second child was inside a Starbucks on I-80 in front of a TV were inside, no other life was declared safe. No furtively piercing glass! glass! (Long Live the Home for the Dreamer).

A second child was inside a Starbucks on I-80 in front of a TV were inside. No fuming or saying anything, but the fuming felt and the glass melted. Upon closing the house, I heard screams downstairs calling for help. A voice on the wall of the building asking for help is “WATCHED TERRORIST RATFIAGE'S MISSION,” screams another child. Officials responded “no comment” when asked the meaning of this phrase.

Nikudorei are bar none the most painful punk band out there. More piercing and raw even than early Halalnihil and late Masokismi. In Torture Sessions for Noise Feast, they change les blockeurs so to speak. DE7E443 The song, with its mocking farts of glitching feedback peeking through its sinuous shrieks of pure electricity, not to mention the faux-noir trumpet moping in the rear, brings to me a primal memory associated with the feeling of pain: my sister biting through the skin of my right arm as we ride a small amusement park ride together, causing blood to escape. Another: pulling the bandaging from my torn-up knee where the blood had soaked through, forming a sizable scab, connecting my flesh to the cloth.

Hikers on Saturday stumbled across the bodies of two men at Tolmie Peak Lookout, a 7-1/2-mile hike in the northwest corner of the park. The men, ages 29 and 34, died of apparent self-inflicted gunshot wounds, according to park officials. It is thought the pair committed suicide on Halloween day.

They have not been identified, and neither are from Western Washington.

This time of year, Mowich Lake Road is closed for the season and hiking a stretch of the road adds a mile to the hike. It was not immediately known when the men shot themselves, but it was believed to be within a few days before they were discovered. The men were found near each other and close to the lookout, park spokesman Kevin Bacher said.

Their bodies were flown out of the area Sunday. The Pierce County Medical Examiner’s Office is conducting autopsies.

They were dressed in Fallout 4 costumes.

That's about one Tesla Model 3 and 0.8 Bitcoin in savings!

If you don't have $49,999.99 right away but still feel that you need this TV in your life, you can pay for it in monthly installments. More exactly, Samsung lets you purchase the set for $1,041.67 per month over 48 months.

Would you buy it?